HSBC will resume offering mortgages to buyers with a 10 per cent deposit, following similar moves from the likes of NatWest, Halifax and Coventry Building Society.

The bank said that its 90 per cent loan-to-value products would be available to customers from 12 January.

Two and five-year fixed rates will be available, with terms of up to 35 years. The rates will be announced when the mortgages are launched next week. 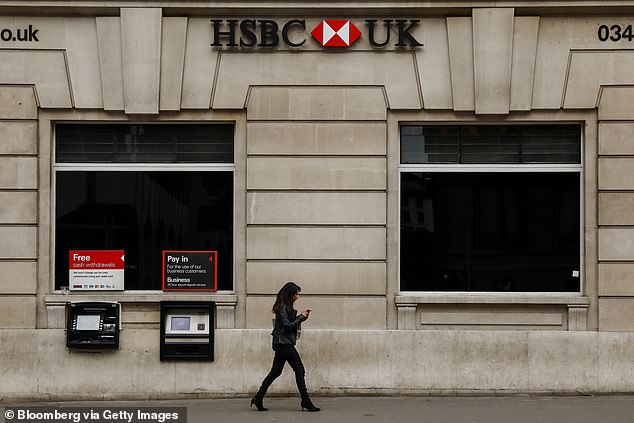 Customers will be able to borrow up to £400,000, which means the mortgages will only be suitable for those buying properties that cost less than £450,000.

High-LTV mortgages such as these are usually popular with first-time buyers and homeowners who want to move but do not have a large amount of equity.

Michelle Andrews, head of buying a home at HSBC UK, said: ‘I am pleased and proud to announce that we will be re-introducing mortgages at up to 90 per cent LTV.

‘These mortgages build on our significant support for brokers and mortgage customers throughout 2020 and will be available across the board – for home purchases, first time buyers and to those remortgaging – all up to a maximum of 35 years.

Most banks pulled their 10 per cent deposit mortgages from the market during the initial lockdown in March.

One of the reasons for this was that lenders and brokers were worried that the logistics of working at home and restrictions on carrying out property surveys would cause about a backlog in the mortgage application system, which their staff would not be able to cope with.

However, Andrews said that lenders had learned from the first lockdown and would be able to cope with demand better this time around.

‘The new lockdown will undoubtedly present challenges, but the experience of overcoming numerous difficulties during the original lockdown, for example making more use of automated valuations, will be invaluable,’ she said.

‘We are all seeking a return to normal, although for many it will feel like we may not see that for a while. With us returning to the higher LTV space, hopefully that is a little bit of welcome normality.’

Other lenders have been slowly moving back into the 10 per cent deposit market since December.

NatWest recently launched a two-year fixed deal at a higher rate of 3.55 per cent with a £995 fee, but its five-year fixed product has a slightly lower rate than Coventry’s at 3.6 per cent and a £995 fee.

The digital-first challenger bank, Atom Bank has some of the most competitive rates on the market, offering 3.09 per cent on a two-year fixed deal with a £1,500 fee and 3.24 per cent with the same fee for its five-year fix.

However, these rates are still higher than those that buyers were being given before the pandemic.

At the same time, buyers with deposits of 40 per cent or more have seen rates fall, sometimes to as little as 1.2 per cent